The purpose of this article is to look at how you can control and direct your company pension money: from the day you leave your job, until the day you die.

When I leave my company, what are my pension options?

Registered Pension Plans (RPP) can be either a:

Defined Benefit (DB) pension holders
For those that hold a Defined Benefit (DB) pension, there may be no further need to look at the locked-in account path. The DB pension holder is already in a great position. The payout is guaranteed by the employer. Any shortfalls in the plan, must be made up by the employer. The road map below shows that it is possible for the DB pension holder to take the ‘commuted value’ of his pension and move it to another account. However, he should only do that if he’s very confident that he can ‘beat’ the return promised by the company. It’s usually better for the plan member to remain in the guaranteed DB pension plan.

If I don’t want to purchase a Life Annuity and don’t want my company to manage my funds, what can I do with my pension?
You can move the funds to a locked-in plan.

But, why do my funds have to go into a locked-in plan? Why can’t I just move my Registered Pension Plan (RPP) to my Registered Retirement Savings Plan (RRSP)?
Legislative rules require that an RRP must be used to purchase a form of retirement income. 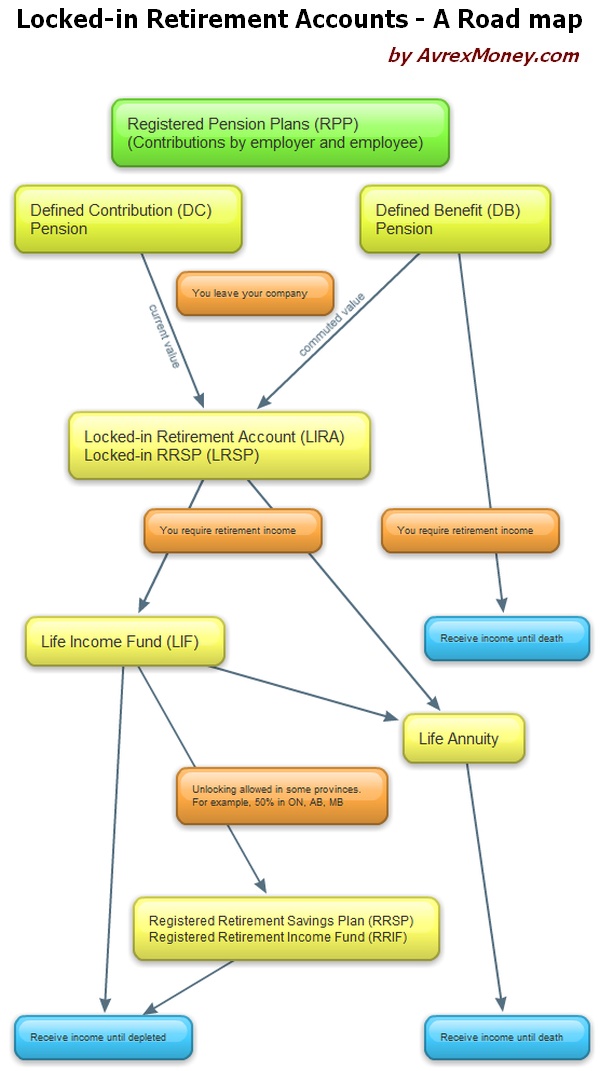 To proceed down the Locked-in path, you must use one of the following government mandated Locked-in accounts:

The plan that you can use depends on your province of residence.
LIRAs are available in: Ontario, Alberta, Quebec, Saskatchewan, Manitoba, Nova Scotia, Prince Edward Island, New Brunswick and Newfoundland.
LRSPs are available in: British Columbia, Yukon, Northwest Territories, Nunavut.
LRSPs are also mandated for all federally regulated pension plans, regardless of province. For example, let’s say you leave your job at an Ontario bank. Even though you work in Ontario, your pension would not be transferred to a LIRA. Instead it would be transferred to a LRSP, due to the fact that bank pensions are federally regulated.

LIRAs and LRSPs are similar in that:

You’ve now reached the point in the road map, where you are retired and ready to start receiving income.

You can transfer your funds to one of the following plans:

Life Annuity accounts provide the annuitant with a guaranteed series of future payments until death. There is the advantage of piece of mind with this option. One perceived disadvantage of this plan, is that by giving a lump sum of money to a financial institution, you do not maintain control of the investments anymore.
Locked-in Retirement Income Fund (LRIF) accounts can only be opened in Manitoba and Newfoundland. Several provinces, such as Ontario, have moved away from LRIFs with the LRIF rules being harmonized with the rules governing LIFs.
Prescribed Registered Retirement Income Fund (PRRIF) accounts can only be opened in Manitoba and Saskatchewan.
Life Income Fund (LIF) accounts are available in all provinces except Prince Edward Island and Saskatchewan.

The structure and function of LRIFs and PPRIFs are very similar to LIFs. Let’s look further at LIFs (as a larger portion of the population are eligible for them).

In this article, we have been concentrating on Locked-in plans. Remember, these are plans in which an employer has made contributions, and therefore are subject to additional legislative restrictions.

Can I unlock these plans?
Some provinces allow for the “unlocking” of a portion of these locked-in accounts.
For example, 50% of the funds are allowed to be unlocked in: Ontario, Alberta, Manitoba, and federal based pensions. There is also a timing issue to consider, when unlocking. In Ontario, after you create a LIF, you have only 60 days to perform this unlock process.

For those readers who want to retain control over the investments within their portfolio when they retire (i.e. they don’t want to purchase a Life Annuity and don’t require a company to manage their funds), going down the locked-in account path will give them this flexibility. To gain the most freedom upon retirement, move your RPP to a LIF and then immediately ‘unlock’ 50% of the funds.

For more Details…
This article provides an explanation of the locked-in plans for those who are leaving their RPP plans. However, the rules around locked-in plans are highly dependent on provincial legislation. Please visit your provincial government website for further details on these provincial variances.